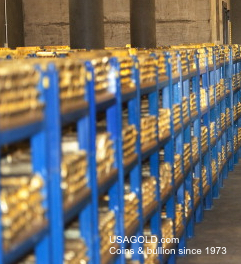 “In contrast to currency reserves, however, gold’s durability, scarcity and finite supply are just some features that provide central banks with surety and trust during times of uncertainty and market turmoil. As such, it provides them with crucially stable assets in their reserves. Gold also tends to have an inverse relationship with another global reserve asset—the US dollar—which means that central banks can load up on gold to protect the value of their reserves when the dollar loses value.”

USAGOLD note: One cannot help but recall, under these circumstances, Britain’s decision in the late 1990s to auction off a significant portion of its gold reserves in order, it said, to diversify into various currencies. What would it give today to have that asset still on the books – one it sold for under $300 per ounce? As it turns out, the BoE sale was among the last major liquidations before the group went from net sellers of the metal to net buyers in 2011. Since then, the official sector has added over 5000 metric tonnes to global reserves

The week that could unravel the global oil market