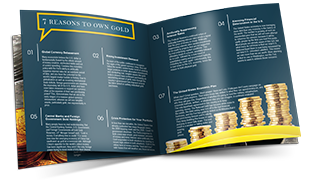 “2008 was bad…but I see this being much worse.”
– Sr. Precious Metals Advisor Steve Rand

The Fed’s decision to hike interest rates by 75 basis points earlier this week came as no surprise to investors who were anticipating yet another bump in a long string of rate increases. Jerome Powell and Company have made it clear that raising rates is their modus operandi for fighting inflation.

Once again, the Fed decided to raise interest rates as part of their unidimensional and last-minute attempt to wrangle inflation. This is the Central Bank’s third interest hike of 75 basis points. To top things off, our financial czars signaled a potential 1.25% by the end of the year. Far from a carefully chosen weapon of choice, this is the only thing in the Fed’s bag of tricks.

This tumultuous economic situation is reminiscent of The Great Inflation nightmare of the 1970s, but that’s not the only repeat we’re seeing. In a recent speech, Powell made it clear that his approach will mirror that of then-Chairman Paul Volcker whose aggressive strategy saw interest rates hit record highs of more than 16.5%.

It was the Fed’s misguided monetary policies that contributed to putting the economy on a crash course in the first place. Now, the game plan for reducing inflation is going to leave the average American to clean up the government’s mess. Powell confessed earlier this week that a recession is a price the Fed is willing to let people pay in its fight against the inflation for which it’s partially responsible.

Learn How to Avoid Costly Rookie Mistakes & Invest in Gold Like a Pro!

This isn’t the first time the economy has been prescribed a regimen of never-ending rate hikes, so the side effects aren’t impossible to imagine. Government and individual debt could surge past already record highs, unemployment may jump higher, and traditional markets might continue to buckle under the pressure.

As the Fed stokes fears of a recession and inflation surges higher, investors are eagerly searching for safety from the defeated markets. For decades, precious metals have provided a reliable hedge against inflation amid economic turmoil and uncertainty. As traditional assets have tanked, gold and silver prices have remained relatively strong.

Instead of trying to time the market bottom, you should start investing in gold now and simply wait until prices rise. The economic forecast is dismal which is good news for the future price action of precious metals. Grab a FREE copy of SBC’s popular Gold & Silver Investment Guide to learn more about protecting yourself from rising inflation and an economic crash.

Why Shares of New Gold, Endeavour Silver, and Coeur Mining Are Soaring Today - The Motley Fool